It’s been a while since I have posted anything on this blog. It’s funny how time seems to fly by, but I recently stopped of at my blog and realized that I haven’t posted anything since December and here it is already August. All I can say for my lack of blogs is that many things have been happening since the beginning of the year, nothing bad fortunately, and now it seems things are quieting down and now it seems I have a little more time available to get back to reading and adding posts for books from some of my favorite authors that I have missed announcing before they were going to be released. So to start it off,  here is one from Eloisa James. I haven’t read The Essex Sisters Series yet, but when I do this companion seem like good thing to read to close the series off. Anyone else have a chance to read it? 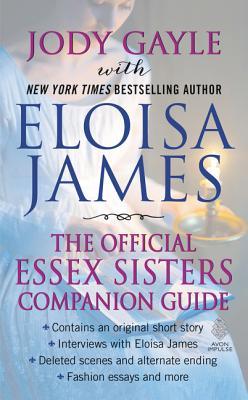 This is a book no Eloisa James fan should miss! Eloisa revisits the scintillating world of the Essex Sisters with “A Midsummer Night’s Disgrace,” a new story featuring a young lady, Cece, who would rather ruin her own reputation than endure further speculation about whether her children will be “silly,” like her brother, Billy. Happily for fans of Pleasure for Pleasure, Cece’s best friend is Josie, Countess of Mayne!

Just as exciting, the Companion includes not only Eloisa’s original notes about each book and her “extra” chapters, but a 170 page alternate ending to Kiss Me, Annabel. Eloisa discarded this shockingly different plot after writing one draft, and the published novel went in an entirely new direction. Make up your own mind about which is better—Eloisa’s original, or the final book!

The Companion also gives you a sneak peek at Eloisa’s newest full-length novella, “A Gentleman Never Tells”—which springs from the world of the Essex Sisters! What will happen when one of the men who ruined an heiress’ debut by labeling her a “Wooly Breeder” (and Josie Essex a “Scottish Sausage”) decides that it’s time to make amends?