Originally Posted By It’s Raining Books (Check It Out! ^-^)

This post is part of a virtual book tour organized by Goddess Fish Promotions. Debbie will be awarding a $15 Amazon Gift Card to a randomly drawn winner via rafflecopter during the tour. Click on the tour banner to see the other stops on the tour.

Hello! I am so excited to visit with you today. Thank you so much for the invitation and the opportunity to give our lovely readers a story from my vast paranormal files!

When it comes to Shadow of the Witte Wieven—and because I am a writer of both fantasy and paranormal romance—my thoughts often turn to the many legends concerning ghost ships. After all, any sighting of Wolf’s ship as he sails in this dimension is deemed a ghost ship by those who can actually see his brigantine. Not many can, you know… 😉

Anyway, one of my favorite legends concerns the American schooner known as the Young Teazer, which targeted the sea trade of the British Empire during the War of 1812, and for a time, she was rather successful in her pursuits.

Yet, as fate would have it, in June of 1813, British ships finally trapped the Young Teazer in Mahone Bay which is situated between Mason Island and Rafuse Island. Escape was impossible and the hands aboard the Teazer knew it. Without delay, the British dispatched a five boat boarding party to take possession of their prize. But, as they made their approach, the Young Teazer suddenly and unexpectedly exploded.

Survivors later claimed they saw Frederick Johnson, the Teazer’s First Lieutenant, toss flaming embers into the cache of ammunition which instantly ignited. The ship caught fire and that fire spread rapidly. The tactic killed Johnson and many of his fellow crew members that day.

Not long thereafter, very credible reports about the sighting of a fiery ghost ship began to surface. Then one year later, on June 27th of 1814, the people of Mahone Bay swore up and down they saw a spectral ship sailing exactly where the Young Teazer had met its demise. The ship vanished in a huge cloud of smoke and fire, but not before the witnesses positively identified it as the Young Teazer.

Even without the help of Facebook or Twitter, it didn’t take long for this story to circulate coast to coast. As the anniversary of the event came around again, a throng of people gathered in Mahone Bay with high expectations of seeing the flaming ghost ship for themselves. They were not disappointed. From that day to the present, people continue to stand as witness to the reality of the phantom ship which continues to sail, two hundred years later. More often than not, Young Teazer can be seen on misty nights which fall within three days of the full moon…

So, tell me, what do you think of ghost ships… fact or fiction? (Visit It’s Raining Books to answer the question and enter the giveaway.) 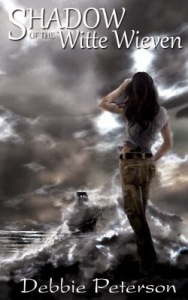 Despite a contract on her head, lone Drug Enforcement Agent, Aliyana Montijo must ferret out a mole and stop the assassination of top DEA officials, as so ordered by the Colombian drug lord she seeks to take down. The task is a daunting one, for there is no one she can trust. No one that is, until she encounters a most unlikely ally.

Former seventeenth century captain of the Dutch West Indies Company, Wolfaert Dircksen Van Ness, now from a parallel dimension, encounters the beautiful agent during an unearthly storm in the Bermuda triangle. Drawn to the Spanish beauty he rescues, he pledges his assistance, despite her reluctance to accept either his help or his heart.

Can Wolf bridge both space and time to claim the woman he loves?

Something terrible had happened. She could feel it. She raced toward her supplies and grabbed hold of her backpack. Her fingers shook as she unzipped the bag and yanked out her phone. She tried to call Greg several times over before it dawned on her that he had already boarded a plane headed for Colombia. She wouldn’t be able to contact him until the morning.

Despite all attempts to banish it, the dread grew stronger with each passing hour. A growing notion that Wolf and his crew never vacated the sub, took firm hold. The conscientious men of the Wieven could very well have remained behind to ensure that all went according to plan. The thought of such an occurrence made her sick to her stomach. She couldn’t sleep, and she couldn’t eat. All throughout the long hours of the night, she restlessly paced along the shore, waiting, hoping—and praying.

By the time the gloomy morning arrived, what little hope she’d carried throughout the long night, dissipated. Somewhere in her heart, she finally accepted that her beloved captain wouldn’t be coming for her. Not now. Not ever again. Excruciating pain accompanied that knowledge, and in that same moment, she could feel her heart shattering into an infinite number of pieces. Even though she had endured such pain many times before, it had never assaulted her with the intensity it did right now. She didn’t know if she could survive it. Indeed, she didn’t know if she wanted to survive it.

About the Author: Debbie has always had a soft spot for fairy tales, the joy of falling in love, and happily ever after endings. Stories of love and make believe filled her head for as long as she can remember. However, it was her beloved husband who encouraged, cajoled and inspired her to take up a pen and write some of them down. In 2012, The Wild Rose Press published her first novel, Spirit of the Rebellion.

When she’s not busy conjuring her latest novel, Debbie spends time with the members of her very large family. She also pursues her interests in family history which she also teaches, mythology, and all things ancient and historic.

Buy Shadow of the Witte Wieven at Amazon, Barnes and Noble, Kobo, or All Romance eBooks.