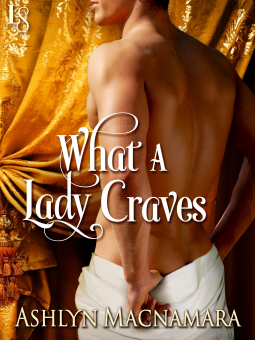 WHAT A LADY CRAVES

Henrietta Upperton is about to marry Alexander Sanford when he rushes off to India to salvage his family’s fortune. Then comes the devastating news that he has wed another. Eight agonizing years later, a storm washes Alexander ashore—injured, widowed, and hunted—and one glimpse of his ruggedly handsome face reawakens the desire Henrietta thought she had buried deep inside. Her body still yearns for his touch, but she’s determined not let him wound her again . . . not this time.

For Alexander, honor always comes first. But only now does he realize that when given the choice between two virtuous deeds, he picked the wrong one. On the run…